We all know what a great influence Star Trek has had on technology and the sciences but we hadn’t appreciated what a huge impact it has had on the music industry. In our first post we shared some of our favourite Star Trek bands and Fan created songs. In this post we will share with you more from our Trek Playlist including regular songs with Star Trek References and also some of the Actors from Trek who are also performers and have albums.
These blog posts were inspired by a thread on the Showmasters forum.

This category is for contemporary songs with some reference to Star Trek. There must be loads that we don’t know about so please share. But these are some of our favs. See bottom of post for links to Amazon MP3s where available.
Herf Nerder – Mr Spock. Not only is the name of this band a Star Wars slur but they wrote the theme tune (and sang the theme tune) to Buffy. All Trekkie Girls can relate to this song. Look out for their video too, for green girls, tribbles and redshirts! There’s also an interview with them on StarTrek.com
Beastie Boys – They have plenty of Star Trek references in their tracks and even dress up in Starfleet uniforms for their video Ch-Check It Out. The references are hard to decipher but the opening lyric is: All you trekkies and tv addicts, Don’t mean to diss, Don’t mean to bring static
All you klingons in the f**king house , Grab your backstreet friend and get loud.
Does anyone else think they walk like the Ferengi in their videos? (Think TNG The Last Outpost).
Jamiroquai – Cosmic Girl. Disco ain’t dead at Trekkie Girls HQ. Subtle Trek references “Step into my transporter” “Do I have to go Star Trekkin?”.

The Black Eyed Peas – Rock That Body. This is a rather unusual reference: Space be boomin, the speakers pop

Galactic comb and Mr. Spock
We bumping in your parking lot
– #WhatTheSpock does that mean? It is a good gym song if you’re working out to fit into a costume for a convention or you have a betazoid wedding this summer.

Then there’s Sabotage. We all have that in our playlists surely. If it was good enough for alternative little James Tiberius Kirk, we’re having it too. If you haven’t screamed along to Sabotage whilst driving a vintage convertible towards a cliff edge in Iowa – you haven’t lived! 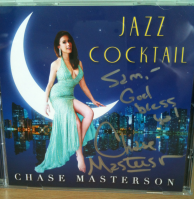 See our write up on Chase’s latest CD. We have been singing along to this (badly!) whilst driving to work and when we get there, we can barely speak!
Check out Chase’s website for more info on some of her other work but we would recommend getting a copy of her latest album in person when she comes to Destination Star Trek London in October.

You already know every song on this album, but beware of listening to ‘I’ll be seeing you’ – you may experience an odd form of PTSD. Just remember, you were never at AR-558 but this song can bring up some empathic horrors from witnessing it. But if your leg starts hurting, play ‘it’s only a paper moon’ and it’ll start to feel better.
Brent Spiner

Admittedly, neither of us own his Dreamland album but we have seen him selling it at conventions.
We don’t wish to comment on something we don’t know about so if you wish to learn more, check out Brents Website for samples and check out this review on Trek Movie

Tim Russ
We saw Tim and his band play recently which you can read about it in our convention report here. Bottom line, he is AMAZING. If you have the opportunity to see him perform – just do it. And again, if you get the chance, pick up his CD in person so you can get it signed.
Our favourite song is from his latest album Now and Then, called Still Raining. From iTunes

William Shatner
You have to have some Shat on your playlist! If there isn’t a Ferengi Rule of acquisition regarding this, then there should be.
‘Seeking Major Tom’ is a fun spaced theme album with guest contributors such as Sheryl Cole Crow and ‘Has Been’ …well we have never got much past listening to Common People. – But only because it is so good and funny, we are concerned nothing can top it.


We must give a mention to Voltaire who write Star Trek/Star Wars parodies and has come highly recommended by our Trekkie Mum Teressa. We have a feeling these guys might be a future big hit in the Trek Music Band league.

Thanks to everyone who have shared with us songs from their playlist. You may wonder why we haven’t included ‘Star Trekkin’. Probably because it is more annoying than a Ceti Eel crawling in your ear and attaching itself to your cerebral cortex. But we have now mentioned it!// Amazon.co.uk Widgets