Being a Trekkie is full time. There is no break from it. Why would anyone want one?
So even when we are on holiday, we see Star Trek all around us.

Sam was recently invited onto the TrekMate 24 hour podcast where she and Marc talked about the episode ‘Captains Holiday’. Sam recalled her holiday to America last month;
I hadn’t read a hardback book in a decade but I bought a big black one so I could slap it shut with one hand Picard-style whenever I was rudely interrupted. However in reality I was grateful everytime a poolboy offered me a refreshing beverage and secretly disappointed no one offered me Jamaharon.

Everything was better when I spotted Wesley Drive though.

We have recently returned from the South of France where we were out celebrating the pending marriage (or doom) of our Trekkie in Training Kaz, for which Carole is the maid of honour (There’s a special Bat’leth for that, right?) and Sam is the grooms sister. 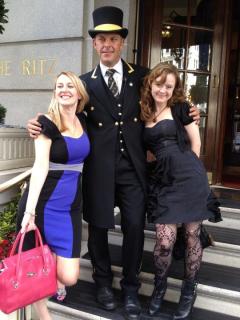 So we started the weekend in style in London with afternoon tea in the Ritz.
Not any old tea though? Do we really have to spell it out? We went for Tea Earl Grey Hot!

We hopped on a plane and headed to Nice, France. Ahh France, home of Mon Capitain. We did consider going to find La Barre because in all honesty, we have done that before. It’s a place on a map where two roads cross. There isn’t even a sign to declare that you have entered La Barre, let alone a 12 foot marble statue of Patrick Stewart to celebrate the future birth place of The Picard. Shame on you France, Shame.

Anyway, we were a lot closer to Chez Sandrine than La Barre.

One day we passed through the beautiful town Villefranche-sur-Mur and spotted this omen.

We knew this was bound to be a special place, it was like the prophets were calling so we stayed for lunch.

And thats when we met Mel and his Wife. A lovely chatty Scottish couple. But what made Mel so special was that he looked just like Patrick Stewart!!
The Picard himself.

When we said “do you know who you look like?” Mel and his wife knew exactly who were were talking about!

Mel wasn’t a Trek fan but had looked up Sir Pat after all the comments he had received and kindly let us share this picture on our blog:

If you’re interested in your own Star Trek Holiday you should check out Geek Nation Tours where our mate Larry Nemecek guides you some of the most iconic Star Trek filming locations.

One thought on “Where ever you go…There Trek is.”