On Tuesday night we were very excited to have been invited to an exclusive presentation and hands-on play with Star Trek: The Video game, due to be released on 23rd April. Mere weeks before the release of Star Trek into Darkness.

The presentation was held at the Science Museum in London hosted by Paramount Pictures, Bandai Namco Games and Premier Comms was certainly the poshest Trek event we have ever been too, we felt like daughters of the Fifth House (and we have a vacancy for a Holm to carry our equipment to these events!)
The room was decked out with plenty of consoles so we could try PC, XBox and PS3. The Star Trek movie theme tune bellowed out all night, you would be forgiven for thinking you were in 10 Forward, out of hours, during the sexiest LAN party ever hosted.
Brian Miller, Senior Vice President of Paramount Pictures hosted the presentation and talked through various levels. He is also the game producer and his passion for the game was that of a Starfleet Captain describing his Starship. As Trekkies we were keen to look at this from a fan perspective.

END_OF_DOCUMENT_TOKEN_TO_BE_REPLACED

How we regret not watching the Oscars this morning! Our Twitter and Facebook feed is full of clever Oscar/Kirk comments but the real hero of the night has to be Seth Macfarlane. He is an inspiration to all Trekkies demonstrating that no matter what you do, make sure you include some Trek goodness.
Here is Seth’s opening staring William Shatner as Captain Kirk.

We think we hear a sneaky Qapla’ after one of Seth’s number. What do you think?…Seth?…phone us? Marry us both like Mormons Bolians.
END_OF_DOCUMENT_TOKEN_TO_BE_REPLACED

Game UK are giving away complimentary cinema tickets to Star Trek into Darkness when you pre-order Star Trek – The Video Game. 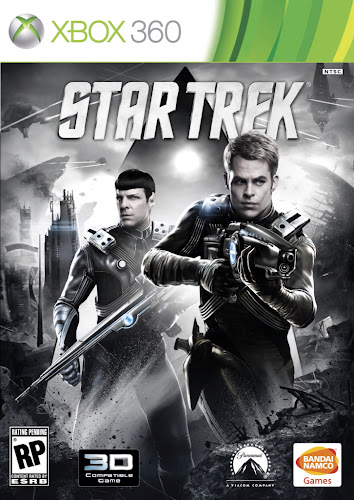 In conjunction with Paramount Pictures and game developer Namco Bandai, the giveaway is supported on any format of the game and allows one full priced adult to see the the movie we’re all waiting for at a Cineworld cinema nation wide.

Consider how often we will probably see this film, and how expensive cinema tickets are, we ask ourselves, What would Quark do!?

For more details see this press release via Namco Bandai

We’ll have more to say about Star Trek The Video Game next week so keep an eye out. We’ll be trying it for ourselves and letting you know all about it.

The funniest thing happened this morning. We saw two women running out of Tesco clutching a life size cut out of Daniel Craig. Can’t say we blame them, had it been any of the Star Trek cast we may have done the same (we like to think we’re badass but in truth, we would have asked permission to have the cut out once they were finished with it – we’re sooo Starfleet).

So it was with great excitement to find this afternoon that Paramount have released a new poster and an animated one at that. This is free and we can all have one each! Yay!
This features a superb landscape shot of London, lending even more credence to our campaign for London to host the world premiere.
John Harrison sounds super creepy and a bit angry when he states that ‘he has returned, to have his vengeance’. We don’t want to be the Trekkies that cry Khaan but we’re starting to see why fans cling on  (pardon the puns) to the idea.

Click on the Live link above to join our chat room.
Live Video app for Facebook by Ustream