Showmasters always seem to be looking out for us Trekkies and if you frequent their Forums you will have seen today’s announcement that Terry Farrell and Diane Muldaur will be attending next years show! 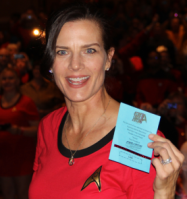 We have only seen them both once and that was quite a while ago now, and in the States.
Terry is as popular with us fans as Dax is with the entire Alpha Quadrant. Did you see those pics of her at Las Vegas con this year dressed in the TOS mini dress for the costumed world record attempt?  What a team player! 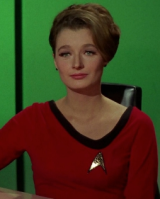 Diane Mulder Muldaur is best known for playing the controversial and fan dividing Doctor Pulaski but all us Trekkies love the trivia quiz where we get to identify her as Dr Miranda Jones and Ann Mulhall from TOS. Lesser known trivia: She looks a bit like Sam’s Auntie Sue.
London Film and Comic Con will be held 12th – 13th July 2014 at Earls Court