Every now and then a YouTube video flies around our Trek circles that stops and makes us think. We have lived fortunate lives yet we can still empathise with the healing power and strength that can be drawn from Star Trek.

This is a video of fan Isaac ‘Feet’ Jensen, an Army Combat Medic who lost his legs and use of one hand in a tour of Iraq, addressing and thanking the crew of The Next Generation for helping him get through his PTSD. It is bound to leave you emotionally compromised as it did the whole cast and the audience of Salt Lake City Comic Con.
We think this is what makes the Star Trek community great, that we have the opportunity to meet our on-screen heroes and thank them, and in return the crew of the Enterprise got to meet a real life Hero and thank them back.
Source: Trekcore 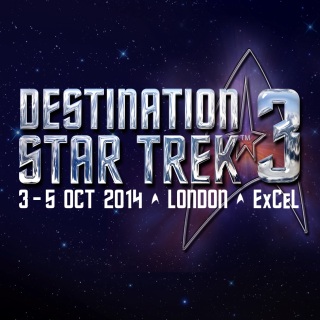 There were a few slips along the way which added to the excitement and build up of the announcement. Tim Russ apparently mentioned in a tweet that he would be in London 3 – 5th October and took it down at warp speed. (We can imagine Janeway giving him the glare of doom for doing that).
Then Marina said tweeted that she would be at a DST in October this year whilst replying to a question (but she didn’t remove it because she is fearless!).
The next clue was in an email from DST stating that the announcement would be exclusive on Facebook and Twitter however on some email platforms, the text under the embedded image showed up stating that it was indeed in London. We didn’t see that but the ‘Geordi eyed’ wonder Misty Chance was on it!
Looking back on it, this just made the last 48 hours even more exciting. It wouldn’t surprise us if the convention founders orchestrated this in some clever PR scheme to get us talking about it….. maybe, or maybe some people will be receiving mek’leths in the post?

But you know us, we can’t believe anything until it’s officially announced. And here it is! Our thoughts –  Frickin Amazing!! We’re glad the location and date wasn’t released any later and we are glad that it isn’t that far from us (thinking of our own pockets here!). London makes a lot of sense, it’s in the organisers home turf and has great transportation links.
There is one slight problem…..only for Sam though. Sam is due to drop baby Jean-Luc two weeks before! It’ll be ok though?? Right?