After only 5 hours sleep, I woke to the excitement that both Jonathan Ross and Jeri Ryan, yes THE Jeri Ryan(!!) had replied to my tweets!

Carole and I apprehensively made our way over to make-up (that naughty Trekkie Girl Teressa had had too much Tranya at the Risa party!), where we were transformed in to Orion Slave Girls for the day! Thank you to the amazing Karen Ward and her team for ‘greening us up’ – great job ladies! 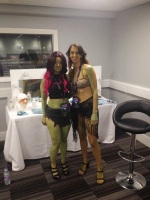 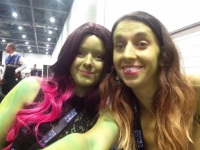 When our makeover was complete we rushed along to the Enterprise A stage where our job was to welcome people into the Guinness world record attempt. Sadly we didn’t break our own world record for the ‘largest gathering of people dressed as Star Trek characters’, but we did raise money and awareness for Macmillan Cancer Supportand everyone looked amazing in their costumes! (My favourite was the Tribble @funkylaura1701)

Being painted green from head-to-toe and effectively walking around in my bikini all day had had me fraught with anxiety and self-consciousness in the lead up to DST3! But it was actually one of the most liberating experiences. The love we felt from fans attending the convention was exhilarating – we couldn’t walk four or five steps without someone requesting to have their photo taken with us! Apologies again to all the wives that had to be the photographer whilst their husbands posed between two scantily clad green girls!! We even had parents who wanted us to pose with their children! (If anybody knows these people – we’d love to see the pictures!) It was absolutely fantastic, and I’m sure my weekend would have been (still awesome, but) very different had we not agreed to do it?!

Throughout the day we attended various Q&As: the GORGEOUS Karl Urban, the hilarious Brent Spiner, the truly inspirational Nichelle Nicholls and the dastardly duo of Sir Patrick Stewart and his son Daniel. As I don’t want these blog posts to become 10,000 word essays, I think I’ll cover the Q&As in a separate post later. (That is of course if you’re not all fed up with me by then!?)

We were incredibly privileged to be approached by Paul Olsen from 1701 rebuild. Please, please, please check out the project these guys are working on – it’s amazing!!

Trekkie Girl Sam arrived with new little baby Hugh in tow, so after a good catch-up and a well-needed cup of tea, we headed to the highlight of DST3: The TNG reunion. I think Marina Sirtis has to be one of my favourites?! Everything that she says and does has me in absolute stitches! I never knew she was such a Londonder?! Come on Tottenham!! (Don’t tell my boyfriend I just said that!!!)

At this point, The Original TiT’s tweeting reached epic proportions, and seemed to take on a life all of its own. I was tweeting so quickly, a guy sat behind me tweeted that he thought my iPad was going melt! I had some really positive comments on my coverage of the event, with one person even saying I had done better than the official Star Trek twitter account – thank you SO much :))

By the end of the reunion I was shaking, whether this was from the cold (I HAD been walking around in a bikini all day!?), low blood sugar (I think we’d only had a muffin all day!) or the sheer adrenaline of what I had been a part of, I don’t know. But one thing was for sure – the green was coming off! I needed a hot shower and some room service!!

Washed, fed, and ready to get our Trekkie Girl groove on again, we headed back to the Fox’s bar for the “Our Man Bashir” party, where we had our picture taken with the lovely Rob Picardo, were entertained by the amazing James Darren and Tim Russ, met the FABULOUS Misty and schmoozed the night away with Jordan Hoffman, Larry Nemecek, Vaughn, Casey and Steve of the Enterprise Blues Band, James Darren, Max Grodenchik and legendary ST make-up artist, John Paladin. Yes, I did just name-drop all those people! It’s a big deal to me!!

When Fox’s eventually kicked us out in the wee hours, we head back to the Novatel where we found Tim Russ casually strewn across one of the sofas, really feeling the jet-lag, poor thing! He was trying to work out when he was “allowed” to go to sleep, so as not to make the jet-lag worse, bless him?!

Sadly Tim headed off to bed, whilst the rest of us drank and danced the night away. I found out that the Trekkie Girls had quite a Gay following at the convention, embarrassing peed in the men’s loos by mistake, and did my best “Bambi on ice” impression and almost broke my neck on a wet floor, had it not been for Larry who saved me! (Well, who’s arm I almost pulled out of its socket trying to save myself – but thank you anyway hun!)

At 5am I still wanted the party to continue, but Carole dragged me off too bed, like the good Commanding Officer she is! We did have another early start remember…

Tomorrow… Day Three of DST3: quite possibly the best day of my life?!