What an interview! If you found todays news regarding the fan film guidelines from CBS as exciting as an episode of Come Dine With Me on Vulcan then you’re in luck, because something exciting had happened…..

Recorded at the Saturn Awards, Collider got this beautiful interview with showrunner Bryan Fuller where he reveals how far along they are in the process. And it’s rather far!

We love his enthusiasm for the Bridge design, the open possibilities of casting and the benefits of streaming…
The interviewer asks some great questions, all except THAT question!

It sounds like we are just weeks away from some solid news with patrons of SDCC being the lucky first recipients.

Proving that Star Trek is more relevant and cooler than ever, it’s getting its own Podcast! Hosted by the amazing Jordan Hoffman (UK’ers will remember him as the entertaining panel MC at Destination Star Trek 3) he is known as a film critic, writer of One Trek Mind and general Star Trek commentator favourite.

An introductory episode is already online available on iTunes and Play.it where Jordan provides a synopsis of what to expect. From listening to it, there is an emphasis on encouraging new fans into our collective. Which is fantastic because as a group, as podcasters and bloggers we can be accused of being too insular.

We congratulate each other on in-jokes and obscure references and without intending this could be off-putting to people wanting to join the series as such a late time.

This is where we must confess, we don’t really listen to podcasts. We have wonderful friends who create them but we scarcely find the time. It has taken us a week to listen to this introduction episode alone!

Before we listened we had some questions. Firstly, the podcast/blogger market for Star Trek is extensive! What makes this unique? Well Engage sounds forward facing, looking at the new series and has access to information and interviews. Jordan mentions that we can expect interviews with the new crew and other people that will appeal to Star Trek fans such as Weird Al Yankovich and Adam Nimoy!

Our second thought was; as this is an ‘official’ podcast, would it be overly sanitised? Luckily Jordan doesn’t shy away from pointing out Star Trek’s weaknesses (he must be friendly with those execs!).

Whilst the rest of us will be discussing the new series in retrospect as they are aired, we think this podcast will enable to delve deeper with a unique access and insight.

We are thrilled that Star Trek is looking at new ways to ‘engage’ with fans, both new and current ones. We hope they embrace more contemporary platforms in addition.

If you take a look at the ‘features‘ section on CBS Action’s website you might notice some familiar faces! 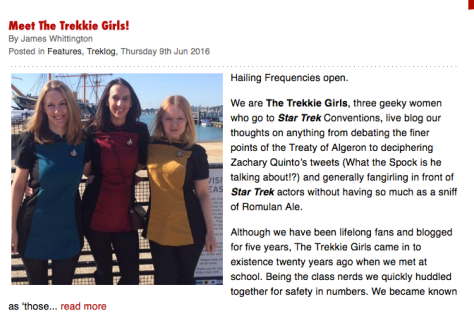 It’s us! We have contributed to their Treklog feature and we’d love to know what you think?

For you old timers you’ll know all about the history of Star Trek but hopefully it sets a background for new fans joining us. We also throw some opinions in for good measure.

What do you think? Did we accurately describe the major themes behind each series?

Where are you on the journey? Were you there from the beginning? Were you part of the great assimilation of the 1990’s? Or like our Trekkie In Training, part of the 21st century resurgence of Star Trek fandom?

Show runner (translation: our latest victim to twitter stalking) posted this ‘teaser’ for the ‘teaser’. Hinting that it may contain Easter Eggs.

So we have gone looking for them!

Fast zoom past Earth and the moon to signify ‘we’re going to be exploring the further reaches of our galaxy?’

The Nebula is reminiscent of the one at the end of Voyager’s opening credits? Also note news story from this week that Star Trek Voyager novelist Kirsten Beyer has joined the writing staff. 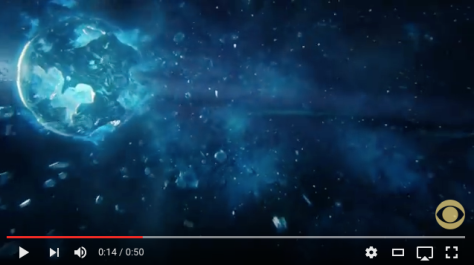 and the Trekkie Girls jumped up and said in our best Sulu accent:

It HAS to be Praxis right?

As for this, initial thoughts are Romulus which we know in the Prime Universe has been destroyed by a supernova. It looks greenish.

Then there is a brief pink circle burst before the logo is revealed.

It has an edgy, metallic somewhat V’Ger vibe about it. We suspect the split in insignia is significant. Maybe alluding to some split in the Federation? This isn’t a new concept. DS9, Voyager and even Enterprise relied on the ‘two types of crew’ to create conflict and drive storytelling.

Now we have have likely made massive leaps in our guessing game jumping timelines and themes but maybe that something we can expect from a new series?

As we previously speculated, rumours suggest that each season could be its own entity?

Make sure you’re also stalking @BryanFuller and @StarTrekRoom on twitter to find out the goss.

It has been a lifelong dream to own one of these ‘Monster Maroons’ as they are affectionately known. But the dream is becoming a reality thanks to a wonderful local costume maker Naomi who has just sent us these images of our very own Wrath of Khan era Costumes, nearly completed. 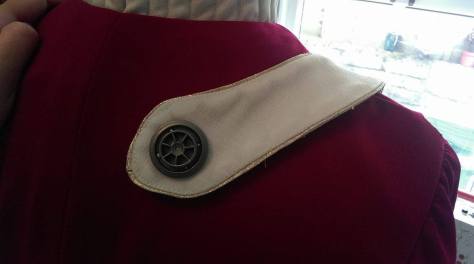 Any spillage on these costumes at conventions will result in court marshall! We LOVE these and KHAN’t wait to get a photoshoot on the Bridge of the Enterprise whilst wearing them!