In this episode of the Trekkie Girls we pay tribute to Anton Yelchin, weigh in on the Gay Sulu drama (aka ‘it’s OK to be Takei but not Sulu apparently!’) and show off our new ‘Monster Maroon’ Starfleet uniforms.

It has been a lifelong dream to own one of these ‘Monster Maroons’ as they are affectionately known. But the dream is becoming a reality thanks to a wonderful local costume maker Naomi who has just sent us these images of our very own Wrath of Khan era Costumes, nearly completed.

Any spillage on these costumes at conventions will result in court marshall! We LOVE these and KHAN’t wait to get a photoshoot on the Bridge of the Enterprise whilst wearing them!

Load credit card and prepare to fire glitter! We are LOVING this! MAC Cosmetics and Star Trek are going on a joint mission to create a Trek inspired collection.

As MAC enthusiast myself I think this is a perfect collaboration. Why? MAC has a culture of acceptance. It’s ethos is to celebrate diversity and it’s own words “we are for All Ages, All Races, All Sexes.”

They have taken the ‘all races’ part literally this time as their collection boasts Orion, Betazoid, Borg and Human influences as this image/advert indicates.

The irony is, the day before this was announced we were on the MAC Cosmetics site eyeing up their body paints for our Orion Slave Cosplay we are hoping to achieve at the Star Trek Las Vegas and Destination Star Trek conventions later this year,

Perhaps a specially commissioned Green Paint will be included?

I’d like to add how refreshing it is to see new markets being explored for collaboration with Star Trek merchandise. It’s great to see it branching outside novelty and collectables.

When purchasing Star Trek products I choose ones that express my interest, but are also useful and beautiful in my home. This ticks all three of those boxes which is actually rare for Star Trek merchandise these days.

Here’s what we’re hoping to see….

Seven isn’t heavy on the makeup, it’s all rather subtle. What would be nice is eyeshadows that work well with hooded eyelids (Like I have – Sam!). Also this would be a great time to bring back the Taupe eyebrow pencil that was discontinued. Rename it ‘The Queen’ or something!

MAC have a few options available to them  thanks to Deanna’s changing looks over the series. But I think this is my favourite. Its just so 2370! umm I mean 90’s!

The 1990’s seem to be having a moment so let Deanna and her 50 shades of brown eyeshadow, the smokey eye and power blush rule!

Uhura’s look is iconic and is practically the ‘go-to’ look for most women cosplayers when doing a Star Trek look.
For the Uhura collection the obvious look is recreating that perfect eyeliner with the feline flicks. Some whispery falsies would work well too. The rest of Uhura’s look is in her amazing complexion which is as clear as her hailing frequencies. We’ll also be needing some nail polish because Uhura is always well manicured.

There’s a couple of directions they can go with the Orions. If we are to take their image as a clue, I’d suspect they’ll go with the Enterprise look over the nu-trek style (yay!).

There isn’t much difference between the Enterprise girls and the iconic Vina from TOS. The only major difference being the shade of lipstick. Personally, I think the dark lip suits the Green girls better. (Don’t even get me started on the orange colour from the movie!).

Not only am I hoping for a body paint (purely selfish reasons!) but also someway of blending that look into the eyes. – A green smokey, some glitter? A contouring and finishing product would also help recreate this look.

So we will wait and see. And wait a long time too, because it won’t be available until 25th August online and inshore 1st September. We hope this is internationally, but we’ll let you know!

Here’s the garb from StarTrek.com:

This summer, MAC will introduce a collection of makeup inspired by Star Trek and, more specifically, Deanna Troi, Uhura, Seven of Nine and the Orion Girl, Vina. The 25-piece special deco collection will encompass lip, eye and face products.

“Star Trek is an iconic pop culture phenomenon whose storylines pushed gender and racial boundaries,” MAC creative director James Gager said in a statement. “For its 50th anniversary, we celebrate each of Star Trek‘s powerful women in a transcending, transformational makeup collection.”

Like Loading...
Anovos, the premium Star Trek and Battlestar costuming gurus, have just sent out this email announcing their new Standard line of costumes. Designed to be comfortable and accurate, most importantly they have used the word ‘affordable’. This is great news for those of us who want the look but not the credit card debt! 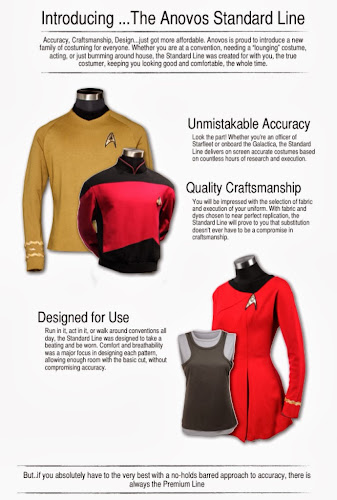 As we have gone all routes, from having costumes made, buying from the cosplay eBay stores and the superb premium line at Anovos, we are really hoping this is the happy medium us fans have been waiting for.

Just stumbled across this top by River Island and thought this would be great for an improvised TNG mirror universe cosplay. Best bit is its only £20! 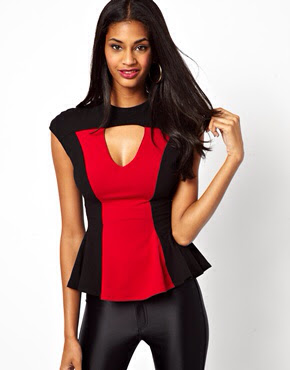 Could also be a Starfleet/Klingon crossover with that boobie cutout.